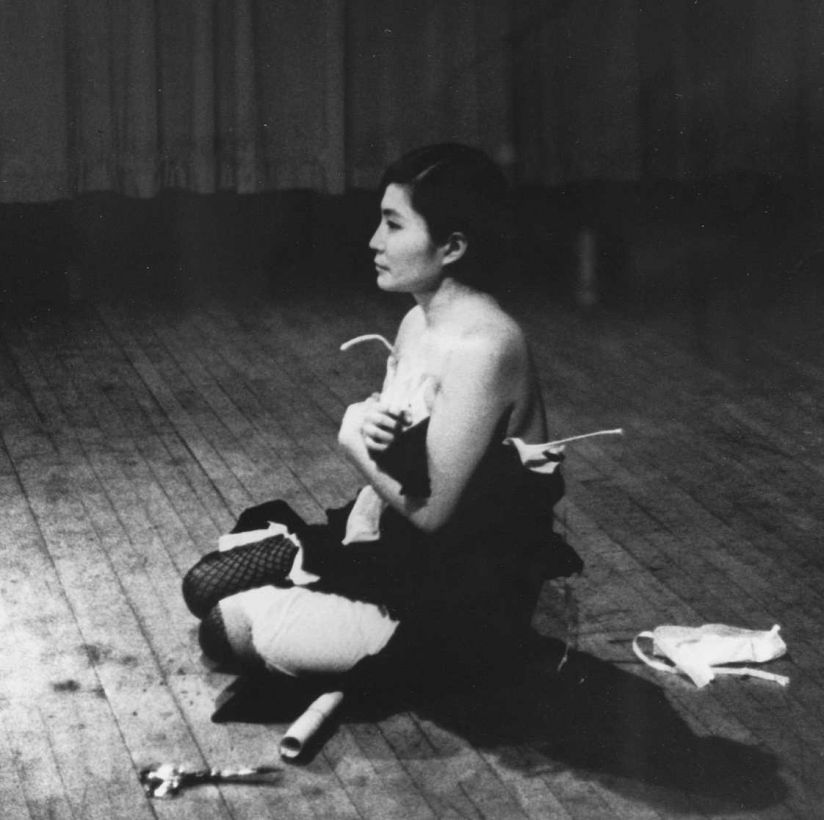 Ruarts Foundation is the partner of the first time in Russia a large-scale project of Yoko Ono’s art featuring her legendary textual «Instructions», reenactments of the artist’s classical performances and her video art.

The show at the Moscow Museum of Modern Art opens as a part of the International Festival-School of Contemporary Art «Territory».

Yoko Ono is a major figure in the 1960s Conceptual Art, a member of the Fluxus movement. She contributed to the development of action art, happenings and video art. One of key traits of her art practice of recent decades is a special approach to the viewer, whom she often turns into a partner in her artistic process. The project at the MMOMA envisages two major objectives — introducing the visitors to the key elements defining Yoko Ono’s artistic progress and reconsidering the artist/visitor relationship within the Museum environment. Yoko Ono’s art marries the methods of the 1960s artistic movements, with their denial of figurative imagery for the sake of pure concepts and the search for the answer to the question: «what is art?», and the traditions of oriental philosophical schools on the basis of the elements of Zen Buddhism. The viewer of the exhibition at the MMOMA, together with the artist, responds to the question about the meaning of art, its political and social involvement, the limits of art and their own. The display of the project «Sky Is Always Clear» will revolve around the «Instructions» by the titular artist, first exhibited in 1960s: the motif of corporeality, human vulnerability, free action based on free agency are central for these works. Ono’s «Instructions» are works of ephemeral quality sometimes limited to textual instructions, sometimes embodied as objects inviting the viewer to perform simple actions, acknowledging the contemplative beauty of everyday life. Ono’s «Instructions» have been likened to musical scores and haikus: a collective reading of often impracticable «recipes» by the artist can seemingly transform the fabric of reality through the efforts of all humankind. Yoko Ono suggests the viewers to write down their memories about their mothers («Mummy Is Beautiful», 1997), to point a place on the map where peace should be brought («Imagine Peace Map», 2003), to complete the artist’s unfinished work («Add Colour Painting», 1966) or to play chess on an all-white board («Play It by Trust», 1966). The project «Sky Is Always Clear» will feature the reenactments of Yoko Ono’s classical performances, her video art, as well as her oeuvre «Water Event» (1971) re-created by contemporary Russian artists: Olga Kroiter, Ivan Novikov, Maxim Spivakov, Anna Titova, Stas Shuripa, Sveta Shuvaeva. The exhibition comprises an interactive project «Arising» dealing with discrimination in society and inspired by Ono’s public letter, where she calls women to write in their native language about any case of moral, physical or any other kind of violence and to send along a photo of their eyes. Texts and photos thus collected form the part of the MMOMA display; the project was realized in 2016, in collaboration with Reykjavik Art Museum. A public talk with the exhibition curator, director of the Astrup Fearnley Museum of Contemporary Art (Oslo), Gunnar B. Kvaran, an extensive programme addressing both adult and young audience, as well as guided tours for visually impaired are scheduled as part of the project. On top of all, the Moscovite project will be accompanied by a catalogue. The exhibition partner is the RuArts Foundation that has been supporting significant art projects going in line with its concept for many years by now. Besides, as a result of the long-term strategic partnership with the International Festival-School of Contemporary Art the «Territory» (TERRITORIЯ), the exhibition made part of the festival programme for the year 2019, thus testifying to the complex form of presentation in exhibition practice. Representing a key method of Yoko Ono’s art practice, that is turning the viewer into a co-author of an artwork, will provide a means to feature the art of performance most fully and vividly. Yoko Ono’s project goes along the museum programme featuring solo exhibitions of world known foreign artists and developing relations with international cultural institutions and embassies from around the globe. Yoko Ono (*1933, Tokio), the first Japanese woman to enter the Faculty of Philosophy, majored in music and poetry at Sarah Lawrence College. Yoko’s first husband was a composer Toshi Ichiyanagi, who got- instrumental in her acquaintance with the avant-garde musicians La Monte Yang and John Cage. Yoko’s life is intrinsically associated with music: in her childhood years,- her aunt — a Russian violin player Anna Bubnova — taught her to play the instrument, all three of her husbands were musicians, and during the period 1971-1989 she even gave up art for music. In 1969, together with Lennon, Yoko Ono organised a musical band The Plastic Ono Band. The exhibition curator Gunnar Kvaran (*1955, Reykjavik), director of the Astrup Fearnley Museum of Contemporary Art (Oslo), former director of Reykjavik Art Museum and Bergen Art Museum (Norway), curator of the Lyon Biennale of Contemporary Art in 2013 and co-curator of the II Moscow Biennale of Contemporary Art in 2007. 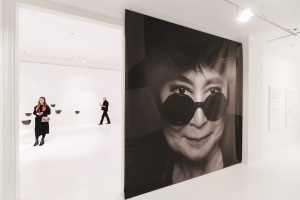 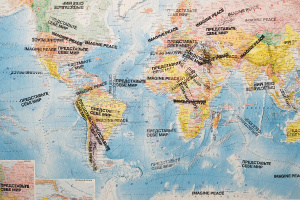 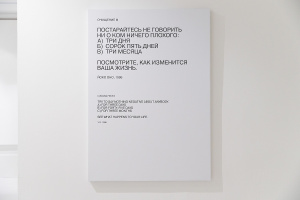 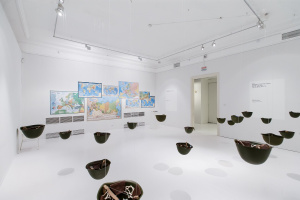 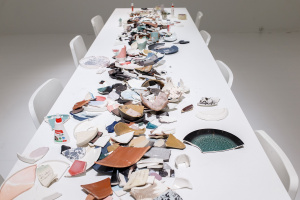 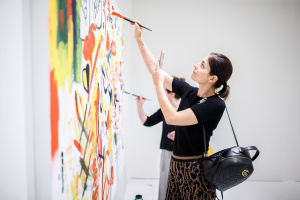 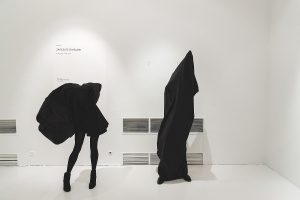 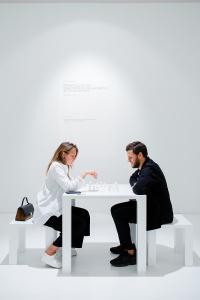 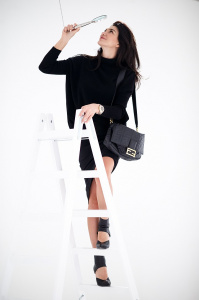 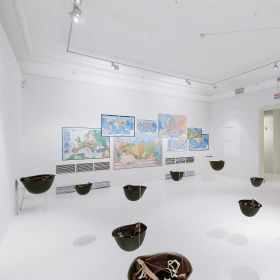 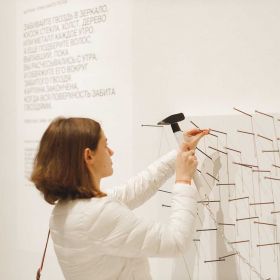 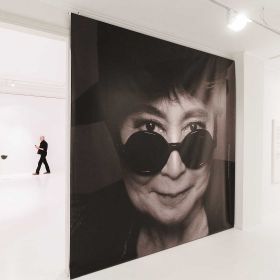 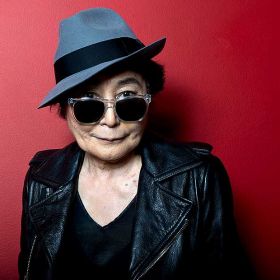 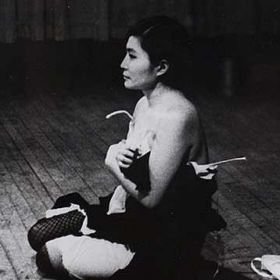 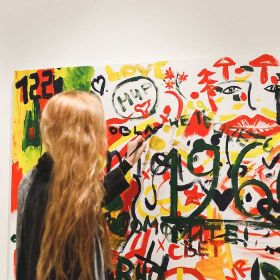 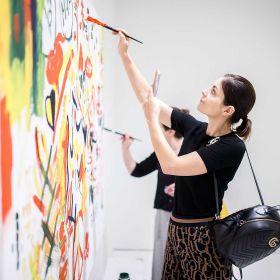